ATOP of Meaningfulworld is preparing to assess the mental health needs of Japanese community post devastating earthquake and its aftermath. Kindly send your financial and spiritual support.

TOKYO — A ferocious tsunami spawned by one of the largest earthquakes ever recorded slammed Japan’s eastern coast Friday, killing hundreds of people as it swept away boats, cars and homes while widespread fires burned out of control.
Hours later, the tsunami hit Hawaii and warnings blanketed the Pacific, putting areas on alert as far away as South America, Canada, Alaska and the entire U.S. West Coast. In Japan, the area around a nuclear power plant in the northeast was evacuated after the reactor’s cooling system failed.

Police said 200 to 300 bodies were found in the northeastern coastal city of Sendai, the city in Miyagi prefecture (state) closest to the quake’s epicenter. Another 88 were confirmed killed and at least 349 were missing. The death toll was likely to continue climbing given the scale of the disaster.

The magnitude-8.9 offshore quake unleashed a 23-foot (seven-meter) tsunami and was followed by more than 50 aftershocks for hours, many of them of more than magnitude 6.0.

Dozens of cities and villages along a 1,300-mile (2,100-kilometer) stretch of coastline were shaken by violent tremors that reached as far away as Tokyo, hundreds of miles (kilometers) from the epicenter. A large section of Kesennuma, a town of 70,000 people in Miyagi, burned furiously into the night with no apparent hope of the flames being extinguished, public broadcaster NHK said.

Looking somber and stoic, the 77-year-old Emperor Akihito said the problems at Japan’s nuclear-power reactors, where authorities battled to prevent a catastrophe, were unpredictable and that he was “deeply worried” following an earthquake he described as “unprecedented in scale.” “I am deeply hurt by the grievous situation in the affected areas. The number of deceased and missing increases by the day we cannot know how many victims there will be. My hope is that as many people possible are found safe,” Akihito said. 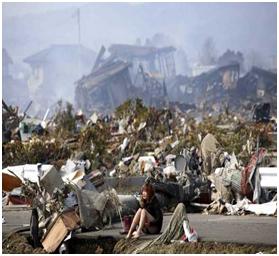 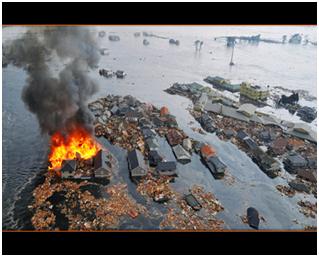