A solemn yet celebratory day in Haiti marks the one-year anniversary of the January 12, 2010, earthquake. 230,000 people lost their lives in this devastating earthquake, 2.3 Million people are still missing; over half of the Haitian population found themselves without homes, 70% of people’s homes were destroyed. Although thousands are angry since they cannot get out of the tent-city. Today, on 12 January 2011, streets of Port au Prince were flooded with a sea of hundreds of thousands people dressed in black and white, with some mournful colors like blue and purple or bright forbidden colors sprinkled throughout the crowd.

We began the day with a march to a variety of town centers, churches, community centers, and streets at large. We went to the FOKAL Knowledge and Freedom Foundation where a select group of NGOs, artists, poets, and many other citizens reflected on their feelings of survival and remembered their losses while reinforcing their devotion to hope. “Kanpe Pale” (“Stand up and talk”) was the theme for the day, which meant express yourself, and discharge, while others in the audience empathically witnessed. We then went to pay our respects to Magalie Marcelin, a prominent figure in the women’s right movement. We first cleaned up the area around the tomb, where human remains continued to be burned, releasing a strong toxic odor that was difficult to inhale the scent weighed heavily on my heart because it reminded me of how fragile people can be. We placed flowers on the grave, burned candles, planted an avocado tree, held hands as we prayed, sang, and then sang and prayed some more.

The afternoon was emotionally moving: We nurtured our body and soul as we sat on the terrace to witness the exact time of the anniversary of the earthquake, 4:47 P.M., when everyone stood in unison, vehicles stopped moving, bicycles and motorbikes stood still on the roads. Everyone came out and put their hands up in the air and chanted “Jesus,’ then sang the Haitian anthem and continued with their marches, memorials, collective meals, and remembrance plans. The sun set very quickly, and people began dancing in the streets in the dark as candles were being lit everywhere. Driving to Jackmel, the beautiful mountains on southeast side of Haiti, we could not believe the hundreds of thousands of people still in the streets singing, dancing, celebrating their survival, expressing gratitude to one another, and embracing one another.

We (The ATOP of Meaningfulworld team) began our work immediately, surveying Haitians about their feelings and their continued challenges on the day of the earthquake anniversary. Haitians call one another “emotional” but at the same time, it is taboo to express one’s emotions or discharge negative feelings, unless it is through reactive behaviors. The next day our ATOP team trained more than 30 students of social work and psychology from several universities, including the University of Notre Dame. Initially, an annual conference was organized to address the emotional and spiritual impact of the earthquake, but due to election upheaval as well as the cholera epidemic, the conference was cancelled. We decided to go on with our humanitarian mission and one-year follow-up evaluation as planned and were grateful for the local coordination of efforts by Fr. Wismick, Jean Yves Valcour, and Sister Lamercie. Although the roads are still unpaved and rubble caused by the quake still blocks many streets, people have the determination to get to their destinations. Of course, some streets were unpaved and difficult to drive or walk through even before the earthquake, but more deterioration is taking place each day. The majority of the group expressed how the training made them feel better physically: headaches have gone away, body aches transformed, shoulders feel released of all stress; and emotionally: frustration is transformed; hope is strengthened, and plans for action solidified. Everyone prayed to have a smooth election without further violence. Haitians are a fun-loving, honest, sharing, and caring people who are tired of being used by opportunistic dictators. I then invited previous team members Junior Duplier and “Billy” Carl Prophet, who functioned as our interpreters and coordinators of transportation in Farahly’s absence.

On day four we went to the elementary school in Petionville to teach on the subjects of love, nonviolent communication, assertiveness, and forgiveness. More than 200 students standing in rows in the courtyard listened attentively; it was extremely heartwarming to witness their hunger to hear, their curiosity to observe, and their commitment to the messages of love. They were asked to repeat each message after hearing it, and they did so loudly and with conviction. At the end the students surrounded me, asking me what my name is, where do I live, and so on! They sang and took photos in groups. We then met with the teachers. I observed that the teachers were using physical punishment (hitting, pinching, slapping) for disciplining purposes. I then conducted a class on disciplining strategies, mindfulness, love, and forgiveness.

On day five we visited the Community Hospital that we worked in last year. Met with the Directors and physicians, made an evaluation and comparison, and donated bags of medicine.

On day six we visited Complexe D’orchidee, another primary school, which is located in the heart of a debilitated neighborhood, Delmar 2—perhaps the second-poorest area in Port au Prince. This school is supported by Rose, a Haitian-American who now lives in Boston. Traveling through the neighborhood, one would never imagine there is a school in this area; in fact, the local driver insisted that we must have been given the wrong address, as there could be no school in this neighborhood. Then we turned right and went through an alley and heard the beautiful voices of the children. When we entered we were shocked to see how respectfully the students stood up in unison and began singing a “welcome to our school” song in Creole as well as in English, which brought tears to our eyes. We then visited each and every classroom, spoke with the teachers, hugged the children, and at the end, the team donated a bag of crayons, paper, and other goods to the school. The tuition for each student is $100 a year, therefore, ATOP is asking your help to support a child in Haiti by paying for one child’s tuition, so they can be educated. I have attached a photo from this very school. Education is the key to the salvation of the next Haitian generation. www.meaningfulworld.com 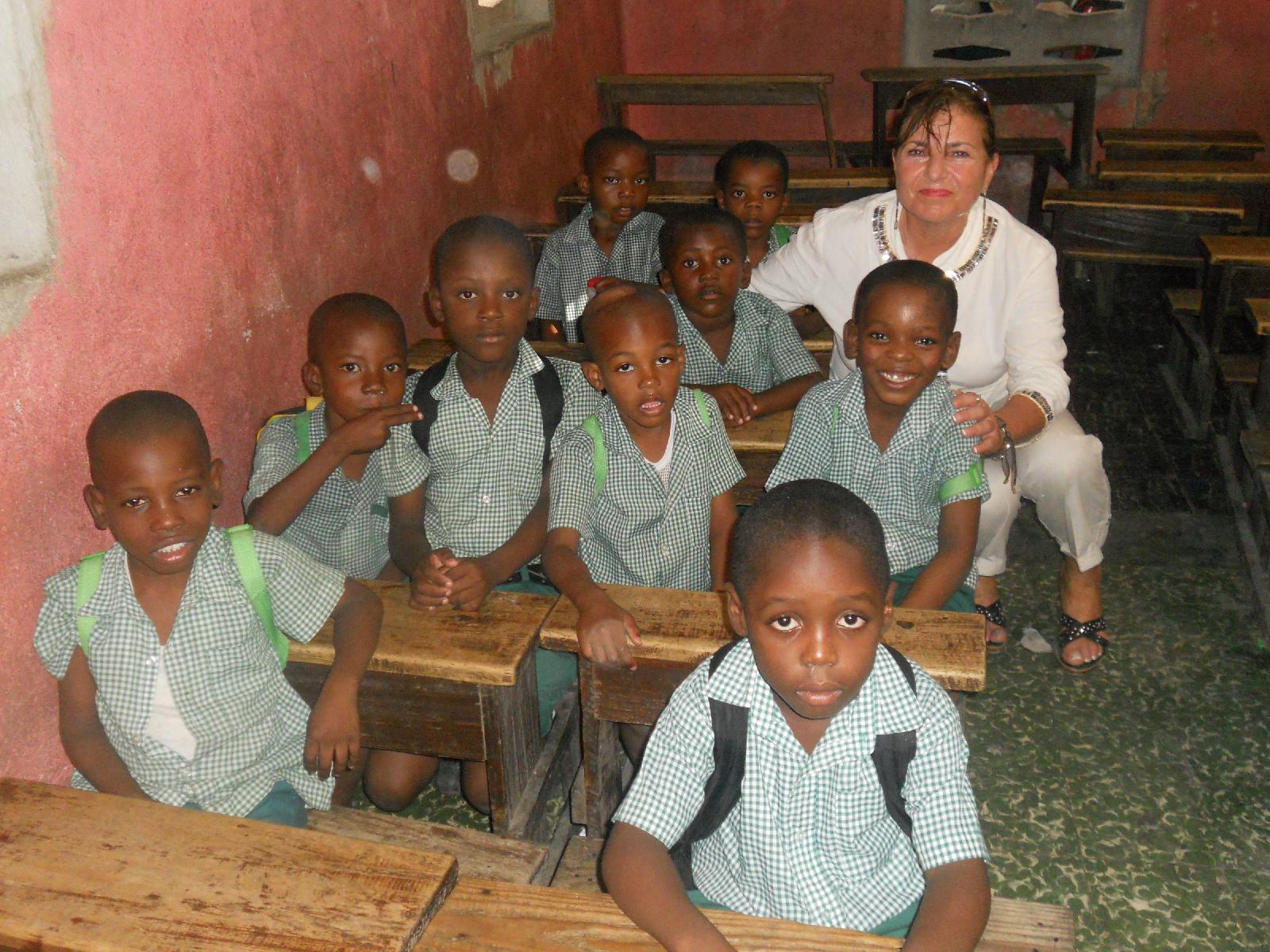