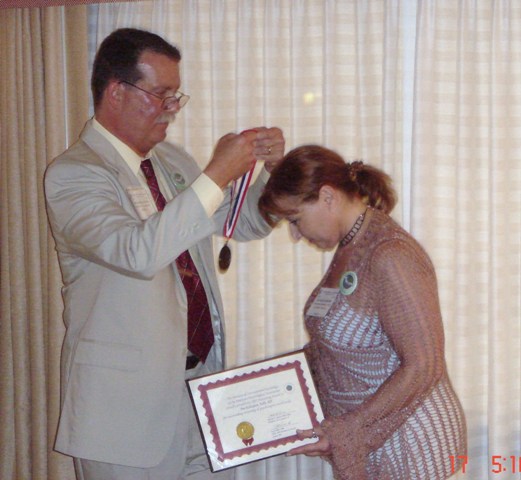 San Francisco, 17 August 2007. Dr. Ani Kalayjian was recognized with the 2007 Mentoring Award from the American Psychological Association (APA) International Division. For more than a decade, Ani has been on a journey of healing through forgiveness and meaning. She has devoted her life to studying the impact of trauma; mentoring and helping others heal so that they can reach a state of wholeness. The Mentoring Award is presented annually to a member who plays an exceptional mentoring role in an international context. The APA International Division represents the interest of all psychologists who foster international connections among psychologists; engage in multicultural research or practice; apply psychological principles to the development of public policy; or are otherwise concerned with individual and group consequences of global events.

Here are excerpts from her protégées:

“Initially I was rather intimidated. I still remember the first email she sent me, just one day after we were matched as mentor/protégée. Her electronic signature occupied about half the page. After reading this seemingly endless list of positions, affiliations, and organizations that she leads, I wondered how she would ever “fit” me in. Fortunately, she quickly assuaged my trepidation with her respectful and humble nature and giving character, when she actually called on the phone. She continues to call me until today, five years after our first appointment. I have benefited from her positive and endless energy, commitment, knowledge, and the network of many of her students, protégées, and other colleagues that gather around her positive energy, sharing and learning and having a lot of fun at the same time.” Ben Bensoden

“What is most extraordinary about my teacher and mentor is her unrelenting commitment to bettering society by unifying minds and hearts; emphasizing likeness in human beings and appreciation of differences. She is steadfast in her optimism that prevention of man-made trauma and resilience post natural disasters can be realized and nurtured through forgiveness, tolerance, and respect for all humanity and earth. Subsequently, it is of no surprise that her practice and benevolence extend far beyond our nations borders. For her courage and determination, her selflessness and generosity I recommend Dr. Ani Kalayjian.” Fiorella Paradisi

Dr. Kalayjian is the Chair of the APA International Division’s Mentoring Committee. She has matched over 15 pairs of mentors and mentees from around the world. Dr. Kalayjian is also involved in the Mentoring Project of New York State Psychological Association, and Columbia University, Teacher’s College Mentoring Program.